Nowadays, it is quite rare for a company not to perform outsourcing operations in some of their information technology needs. Because of the rapid growth of cloud computing, more and more companies are going for IT outsourcing. The question is, why is this becoming a common thing?

Companies outsource their information technology needs for two main reasons: to save time and to save money. Outsourcing this integral part of an organization helps to minimize expenses, such as distribution and general costs, which are sometimes up to 5x the expense of IT itself.

Outsourcing IT functions does not mean you are going to forget about spending on your in-house software engineers. It’s simply that lots of potential savings are waiting for you when you outsource some of your IT operations. So, this post will share several ways for how IT outsourcing saves time and money for companies evaluating it’s use.

To begin with, outsourcing is a bit self-explanatory. You “out-source” a product or service from an outside source. That’s it. Outsourcing is now becoming a common practice which you can see from many different sectors. This activity is needed the most for specific reasons like a lack of in-house talent, or to save time and money.

You might see some companies outsourcing almost all roles in their organization. That may sound extreme, but it might just be the best move if they don’t have the resources. Therefore, outsourcing is the way to go if you need something to get done on demand and save money in the process.

Not all outsourcing initiatives are the same. They are usually performed for specific purposes, which may include:

How IT Outsourcing Saves Time and Money

First, let’s look at the numbers. Recent data suggests some of the most common reasons why companies choose to outsource, which are:

Next, the following information is a compilation of the best possible ways for how outsourcing your IT functions will save you a lot of time and money in the process.

The first and obvious reason for outsourcing your IT is to save money that otherwise might be spent on training or recruiting people. In outsourcing IT talent and roles, you don’t have to worry about allocating a budget just to develop an in-house software developer, for example. Instead, a readily available IT specialist to do everything for you is just a phone call or email away.

What does this look like in action and figures?

Research conducted by MIT proved that around 300 U.S. businesses from 1999 to 2003 experienced a rise in the company’s IT outsourcing budget of $96.14 million, and it was consistent with an average reduction in preparation and recruitment expenses of $121.14 million in other areas.

The ability to tap into a wide pool of highly qualified software engineers and developers is a benefit of having an outsourced IT partner. When looking to find talent, it takes hard work and time to source the right fit, vet them thoroughly, interview them and then onboard them.

Using external outsourcing practices provides an edge for companies when looking to cut costs on recruiting times and specifically in time-to-fill.

It takes a single recruiter anywhere from 50-80 days or 2-3 months to source, interview and hire one developer. Imagine how that efficiency drops when we add more than one hire or even a team of five.

The optimal time it should take to hire a software engineer takes around 30-45 days or 1-2 months. Any process that takes longer risks losing A-level candidates to another company.

IT partners provide an edge to reach this optimal time with their average closing form start to finish within 33 days. With multiple sourcing and recruiting channels ready to go, as well as existing talent pools, they are able to speed up the process and reduce the time-to-hire for partner companies, helping them focus more on interviewing and onboarding than on finding and vetting candidates.

In developing nations, it is sometimes challenging to find unique, qualified staff due to shortages or very high costs. Because of this, outsourcing jobs in developed countries come in handy because of lower costs, fluent English capabilities, and candidates who are great at what they do.

To provide more context, look at Time Doctor’s data for the average yearly salary for a software developer role when recruited in-house:

As you can see, recruiting IT workers on-site can be costly. For example, a junior developer from the United States costs more than a software engineer in Latin America or Eastern countries. As developers gain more education and expertise, their costs are also increasing, making them quite expensive for small businesses on a tight budget.

More hands usually mean more efficiency – even though it’s commonly known amongst engineers about diminishing returns or negative one’s after a certain point.

When recruiting in-house and in the middle of a growth spur, finances and cash flows play a big role in decision making and especially in hiring. At any particular point in time you might only be able to finance a couple of employees in-house, but what about outsourcing tasks?

Big tech companies and most of SME’s are known to have built their companies leveraging a mix of in-house and outsourced staff. Choosing to focus on their core business, in developing that, and delegating other non-mission-critical functions to other people.

In a nutshell, outsourcing increases efficiency by helping a company focus on the essential, on it’s secret sauce, and reduces the operational costs by leveraging wage arbitrage of outsourcing.

On the flip side, you also have the fact that through this same wage arbitrage a company can find itself being able to employ two remote engineers where they could’ve only hired one in-house – increasing efficiency through more hands.

CreditDonkey proved the efficiency of IT outsourcing in their research in which they say, “Another 55% claim that they were partially successful in cutting costs, whereas 15% claim it had little to no impact on overhead costs, recent outsourcing statistics indicate.” Therefore, it’s clear that the majority of those who outsource have substantial financial benefits. 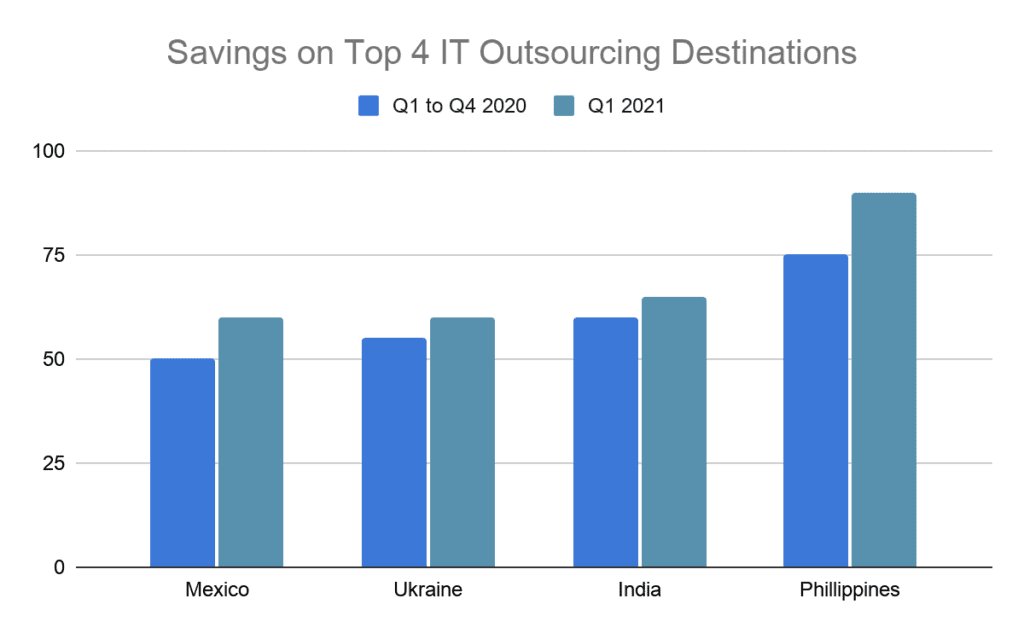 Among the top four nations for outsourcing labor, we see how nations compare to each other in labor cost savings compared to those in the US. The main reason behind this is the cost of living and the economics of these nations. Companies outsourced to the nation will reduce their labour costs somewhere from 60 percent to 90 percent, while at the same time supplying their outsourced labour market with a fair, liveable income.

Of these nations Mexico stands out as the up-and-coming challenger, with their talent pool becoming very popular during 2020, where an increase in remote positions offered by US and Global companies increased by 400%.

Wrapping It all Up

Clearly, outsourcing IT positions like software developers in a company saves time and money, especially in recruitment, talent, and other key areas of a business. While the benefits are numerous, many companies are still skeptical about outsourcing (or don’t know where to start), so they unfortunately miss out on a lot of savings.

Engaging in IT outsourcing might be confusing at first. Therefore, understanding the basics of it is important before diving in. Our recommendation after being in the industry over 6 years is:

If you’re interested in starting a conversation about how to tap into the Latin America, talk to us today